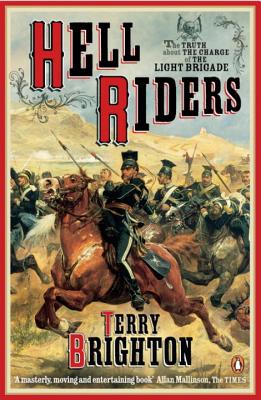 On 25 October 1854, during the Crimean War, the Light Brigade of the British Cavalry Division made the most magnificent and most brutal charge in military history. Almost 700 men armed with sabre and lance, charged straight at the muzzles of Russian cannons. This vivid and extraordinarily detailed account of the charge and the bloody mêlée that followed, by an author with unique access to regimental archives, is told largely in the words of the survivors themselves.

Terry Brighton takes the reader closer than ever before to the experience of charging down the Valley of Death.

On the cover of The Trooper, released in June 1983, Eddie swaps his jeans and T-shirt for a red uniform jacket and blue trousers, grasps a sword and a Union flag, and charges into the Crimean War of 1854. Brutally slain Russian gunners litter his path through the battlefield of Balaklava. The Russian empire [...]

Riding Hell’s Mile: The Charge Of The Light Brigade

At Balaklava on 25 October 1854 during the Crimean War, the Light Brigade made the most magnificent and most brutal charge in military history. 666 cavalrymen armed with sabre and lance charged down a mile-long valley, straight at the muzzles of Russian cannons. In the slaughter that followed, many fell to roundshot and [...]

Into the valley of Death Rode the six hundred. Well, no, not exactly. According to Alfred, Lord Tennyson he wrote his most famous poem, The Charge of the Light Brigade, after reading the first report in The Times, ‘where only 607 are mentioned as having taken part.’ He rounded this number down and wrote of [...]

Beer And Bawdy Songs In The Crimea War

The Soldier’s Prayer was sung on the ships as the army sailed out to the Crimea, and answered by the sailors: Now the first thing we'll pray for, we'll pray for some beer, And if we only get some it will bring us good cheer, And if we have one beer may we also [...]

The Charge: How They Killed And Died

The dying came first. The charge lasted seven minutes and in that time 110 men of the Light Brigade were killed and 161 wounded, some mutilated beyond recognition. When the survivors reached the Russian gun line, they took a bloody revenge on the enemy. Russian artillery fired roundshot, shell and canister. A roundshot [...]