Into the valley of Death
Rode the six hundred.

Well, no, not exactly.

According to Alfred, Lord Tennyson he wrote his most famous poem, The Charge of the Light Brigade, after reading the first report in The Times, ‘where only 607 are mentioned as having taken part.’ He rounded this number down and wrote of ‘the noble six hundred’. When later accounts made it 673, his wife Emily reassured him that the metre was more important than getting the number right.

But sometimes precise numbers do have significance. In his lyrics for The Number of the Beast Steve Harris drew on the long connection of the number 666 with evil and the beast that is the Antichrist. In Hell Riders: the Truth about the Charge of the Light Brigade I recalculated the number of men who charged into the Valley of Death and found that it was 666.

This is such a remarkable conclusion that it needs justifying, so here’s how I reached that figure.

My starting point was the records compiled on the day of the charge. Lord George Paget, who was present at Balaklava, gave a total of 673, based on the regimental returns of those on parade that morning. Because some men later reported sick and did not take part in the charge, Colonel Whinyates used the same records but excluded non-combatants, and made it 658.

I discovered that one man, Assistant Surgeon Henry Wilkin, has been overlooked because he should not have been in the charge. Surgeons were crucial following an engagement and were not required to risk themselves in action. Wilkin had other ideas and charged with the men – he was seen by other survivors. Adding him increases the total to 665.

And that is where it would have remained if one trooper of the 17th Lancers had not become drunk on the night before the charge. 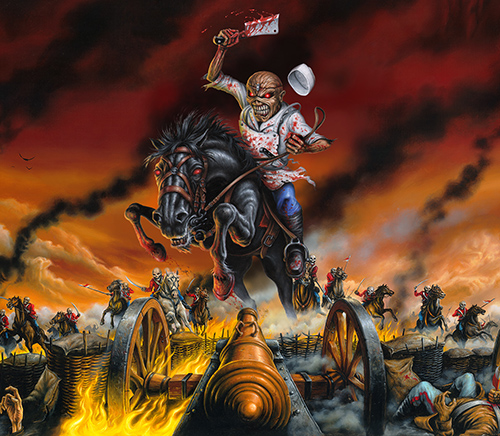 John Vahey earned extra money by acting as the regimental butcher, and spent every penny on beer and rum. The night before the charge he had been discovered drunk, still in his butcher’s overalls, and put in the prison tent.

Vahey was not counted in the regimental returns for the morning parade because he was still imprisoned. He later escaped, took a horse, and arrived in the valley just in time to join the charge. Others recalled seeing him, wearing his butcher’s overall in place of his uniform, and wielding a butcher’s axe instead of a sabre.

On this evidence, we must add Vahey to the figure to make a total of 666. Many of these men were killed before reaching the gun line. The survivors leaped into the smoke that still covered the guns – into what Tennyson called ‘the mouth of Hell’.

Vahey wrote: ‘The Russian battery kept vomiting death on us like a volcano, till I seemed to feel the hot air from the canon’s mouth. Half a dozen of us leaped in among the guns at once, and I with one blow of my axe brained a Russian gunner. With another I split open the head of an officer, and then we went smack through the stragglers, cutting and slashing like fiends.’

James Wightman of the 17th Lancers wrote: ‘The smoke was so dense I could not see my arms before me. In the darkness we cut and thrust like demons.’ His words bring to mind lyrics from The Number of the Beast:

In the mist, dark figures move and twist
Was all this for real or just some kind of Hell?
666, the number of the beast
Hell and fire was spawned to be released.