Swedish craft brewer, Nils Oscar has announced its partnership with Iron Maiden’s  award winning Trooper Beer and launches not one, but two beers in collaboration with Bruce Dickinson. Claiming a world first for the fast approaching 9 year old global brewing sensation, Nils Oscar have created ‘Running Free’ an alcohol free (0.4%) golden lager which is big on character and flavour.

Said Iron Maiden’s Bruce Dickinson: “Trooper’s Global plan has always been to find willing local partners who share our love for great beer. Robinsons have set the standard in the UK but so far our other partners have always nailed my brief of distinctive Trooper beers with a local twist. Once Nils Oscar were interested I knew we could do something unique in Sweden for our huge fanbase there and so alongside our lager we set them the task of coming up with our first alcohol free beer! I think Running Free is spectacular. I can’t wait for our fans to try it and look forward to seeing you all at Ullevi later this year!”

Alongside ‘Running Free’ there is also Trooper Swedish Lager which clocks in at 5% ABV and is a dry-hopped liquid made from Sabro, Cascade, Citra & Spalter Select hops with a refreshing, citrus profile. Both products are presented in 440ml cans.

Trooper Beer has now sold over 30 Million pints since it was launched in May 2013. With ‘Running Free’ available in all Coop Stores in Sweden from today and Trooper being available in Systembolaget’s order range from April 13 plus being exclusively on draft in legendary real ale pub chain, The Bishops Arms, Stockholm for a month.

Cheers or Skal as they say! 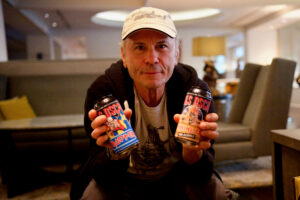