Trooper Takes to the TT

Cheshire family brewers Robinsons are delighted to announce their first foray into the world of the legendary Isle of Man TT, where they will be sponsoring Lee Hardy Racing and their up and coming British rider Peter Hickman in this year’s SuperSport category.  Hickman, who was the fastest-ever newcomer in history at the TT 2014 race, will be riding a TROOPER sponsored MV Agusta, with his specially made race leathers and helmet also featuring the distinctive branding that has powered TROOPER to the brink of being a top 20 ale* in only two years since it’s 2013 launch. The highly successful Premium British beer is a collaboration between Robinsons and rock legends Iron Maiden.

“As both Peter Hickman and TROOPER have immense stand out qualities they are a perfect fit”, explains TROOPER Brands Manager John Robinson.  “We can’t wait to see Peter racing around the famous course on his MV Agusta, which will be one of the most eye catching this year thanks to TROOPER’s instantly recognisable imagery.” 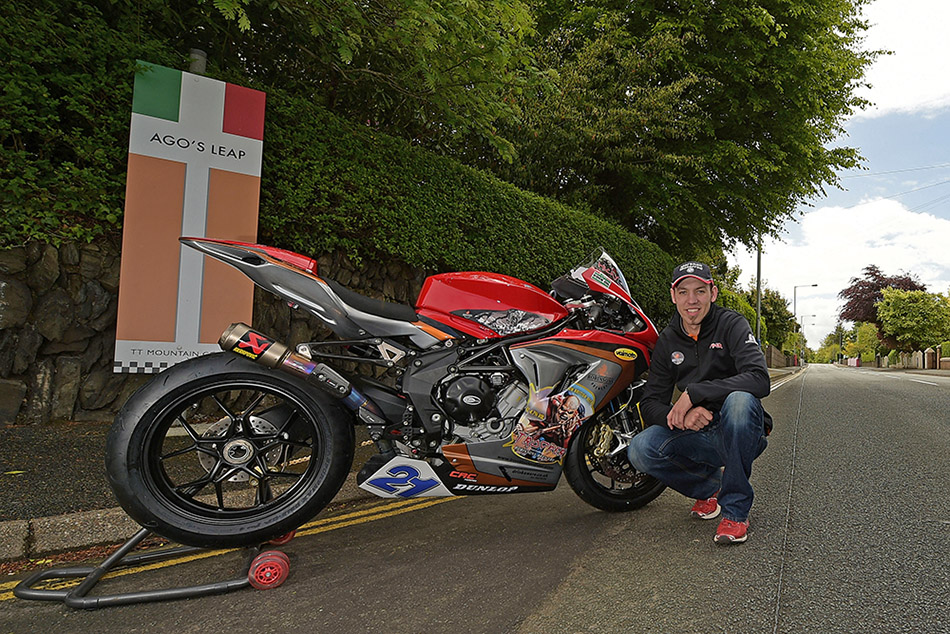 Robinsons have also arranged for two special signing appearances by Hickman at The Creg and The Railway pubs, which will both be stocking TROOPER during the race fortnight. A further four autograph sessions which will be held in the team garage will be announced shortly.

Bruce Dickinson, Iron Maiden vocalist, real ale enthusiast and one of the driving forces behind the creation of TROOPER commented, “It’s a great pleasure to be involved in such an exciting and iconic event as the TT and we can’t wait to see Peter on his bike tackling the famous course.”

Peter Hickman commented: “I’m really excited to be involved with Robinsons and the TROOPER brand for this year’s SuperSport races at the TT. And the link with Iron Maiden is the icing on the cake! The bike looks absolutely fantastic and the team have done a great job getting it prepared and ready to race. I can’t wait to fly down Bray Hill for the first time on it. I’d like to say a big thanks to Jack Valentine of Valmoto for letting us use his bike too.”

The Isle of Man TT is the most-televised motorsport event in the world with 27 million viewers over the duration of the race. With speeds approaching 200mph and an almost unending series of bends, bumps, jumps, stone walls, manhole covers and telegraph poles, the TT is the most challenging motorcycle race in the world.  Its sheer spectacle ensures thousands of fans flock to the Island every year.

Team owner Lee Hardy commented: “I am very excited about the prospect of working with Robinson Brewery and very proud to be promoting a beer created by Iron Maiden. I am passionate about the appearance of my team and between myself and Paintnation I feel we have captured the true TROOPER spirit; I hope everyone likes the paint scheme and there are a few special touches on both the bike and helmet. It is a must to visit the team in the paddock during race week to see the TROOPER helmet on display.”

As well as competing on the roads, 28 year old Peter Hickman races in the British Superbike Championship on the RAF Reserves BMW. During his Isle Of Man TT debut last year, he set the fastest ever TT lap by a newcomer with a speed of 129.104mph on the final lap of the Senior race. You can watch the highlights of his lap here.

Should you wish to find out more or meet Peter Hickman during the race fortnight just follow TROOPER beer on facebook.com/ironmaidenbeer, twitter.com/IronMaidenBeer and www.ironmaidenbeer.com