TROOPER Beer is delighted to announce their return to the bars at the Ramblin’ Man Festival! For the third year in a row TROOPER Beer will be available at the three day classic rock festival, this year in 500ml bottle form with the opportunity to collect a unique, souvenir TROOPER Beer stackcup featuring their new branding!

This year’s festival also sees Steve Harris’ British Lion making their first appearance at the Fair as part of their 2017 UK & European tour on Saturday Night. 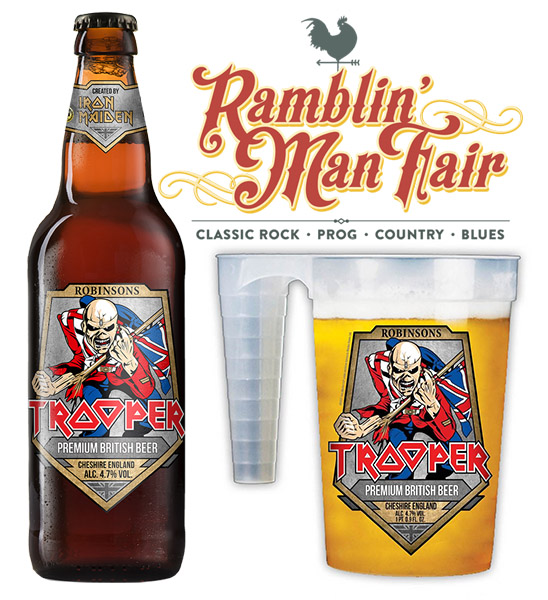 TROOPER Beer is the multi award-winning premium British beer brewed by Robinsons Brewery with Iron Maiden. Sold in over 50 markets around the world and with sales of over 15 million pints the beer has become the go-to choice for the discerning real ale drinker at rock festivals since its launch in 2013. With a bold new look for 2017 the beer maintains its association with Ramblin’ Man Fair. Comments Bruce Dickinson, “It’s a great beer and it’s fantastic to see it in it’s natural habitat! I’m sure it’ll continue to go down brilliantly with festival audiences this summer.”

“Ramblin Man Fair is proud to once again host Trooper on our main bars, especially when we have the honour of Steve Harris’ British Lion tearing up the mainstage on Saturday afternoon! Up the Irons!” – Chris Ingham, Ramblin’ Man Fair