In celebration of TROOPER Premium British Beer smashing through the 10 million pint barrier in just over 2 years, a special limited edition bottled brew, TROOPER 666, will be made available to TROOPER and IRON MAIDEN fans in many countries around the world from the 1st October 2015.

At the request of fans, and following the huge success of TROOPER, Robinsons will make an even stronger ABV limited edition of the original brew. Again created by IRON MAIDEN vocalist Bruce Dickinson in collaboration with ROBINSONS BREWERY of Cheshire, this supercharged 6.6% version of the 4.7% bottled version will be available this autumn for a limited period only. 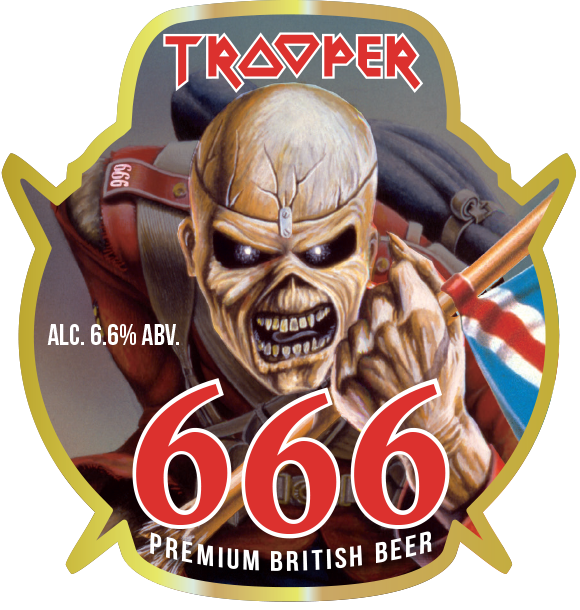 Beer aficionado Dickinson explained, “Our fans have been asking for a stronger brew and it seemed only right to do this at 6.6% ABV!  Despite the links with our song ‘The Number of The Beast’, the name TROOPER 666 has actually come about as a result of some detailed research by historian Terry Brighton, who has shown that there were in fact 666 soldiers that rode in The Charge of the Light Brigade during the Battle of Balaclava in 1854, and not just the 600 of Tennyson’s famous poem.”

Brighton, author of ‘Hell Riders: The Truth About the Charge of the Light Brigade’ asserts, “A nominal roll was made at the time listing the cavalrymen present at Balaclava – I then used other contemporary records, of those killed and wounded, taken prisoner, assigned to other duties and so on, to prove who did and did not charge, and amazingly it added up to 666! Remarkably one of the extras was the hungover Regimental butcher, who charged wearing his butcher’s overall in place of his uniform, and wielding a butcher’s axe instead of a sabre.”

“TROOPER 666 is the same award-winning TROOPER recipe but brewed to a higher gravity,” explains TROOPER Brand Manager John Robinson.  “The result is another wonderfully authentic beer that is packed with malt but slightly sweeter than the original. It has a dry finish and is remarkably moreish.” Bruce Dickinson adds, “I think it tastes tremendous and I personally prefer this straight from the fridge.”

Robinsons started taking global TRADE pre-orders at the start of July, to try and ensure that the limited edition bottles of TROOPER 666 will be available simultaneously in local outlets in many countries around the world by autumn so that fans can sample this highly sought-after ale!

To be sure that fans will be able to buy TROOPER 666 as soon as it is available, Robinsons Brewery are making arrangements for advance orders to be taken directly via www.IronMaidenBeer.com and dispatched from the UK from 1st October onwards. Fans will be able to find stockists and ordering information on the TROOPER website later in the year.

Launched in May 2013, the original TROOPER has proved to be a global success story. The Premium British Beer is now being exported to 42 countries and has already been awarded a Gold Medal by the British Bottler’s Institute. TROOPER has proved unusually resilient overseas for a new beer, maintaining its stunning initial export success with repeated high volume orders across some of the world’s leading importers.