Building on its popularity, from beer lovers internationally as well as in the UK, Robinsons Brewery and British rock legends Iron Maiden have announced a brand redesign for their golden ale, Light Brigade. Continuing its support for Help for Heroes – the British charity dedicated to improving the lives of injured servicemen and women – the refreshed design further reflects the taste credentials of the golden beer brew and follows Help for Heroes’ own brand refresh from earlier this year. 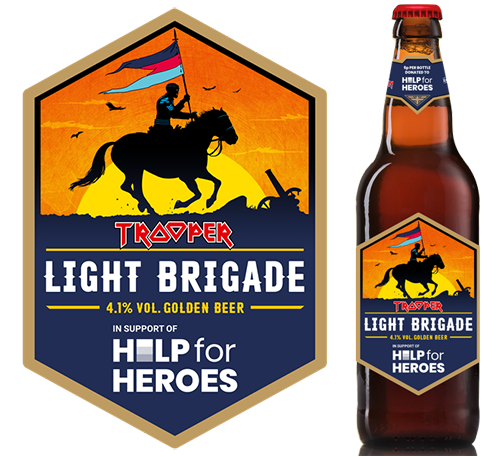 Thanks to fundraising efforts and sales from the beer, Robinsons and Iron Maiden have helped raise nearly £90,000 since partnering with Help for Heroes in early 2018. The redesign launch also follows Armed Forces Week (24th – 30th June), reinforcing Light Brigade’s alignment to the cause. New look Light Brigade will be available in cask and bottle across the on and off trade from July 2019.

The refreshed look will further drive the charity mechanic of 6p from every pint sold and 5p from every bottle sold being donated to Help for Heroes. Light Brigade beer, a unique interpretation of a sessionable golden ale at 4.1% ABV will remain the same. The new look and design will feature Iron Maiden’s iconic mascot Eddie silhouetted on horseback riding across the horizon against the background of a stirring battlefield sunset, and holding a flag bearing Help for Heroes’ colours.

As with every Trooper beer, Robinsons’ Head Brewer, Martyn Weeks, and Iron Maiden lead vocalist and ale aficionado, Bruce Dickinson, worked closely to create a bespoke brew tapping into ongoing beer trends and offering something distinctive to the loyal Trooper beer fanbase. Receiving final tasting sign off from Help for Heroes, in Autumn of 2017, Light Brigade was born and subsequently launched for national and export distribution in January 2018.

Bruce Dickinson, said “We are very proud of our partnership with Help for Heroes and of Light Brigade itself, which has been received extremely well by ale lovers around the world and is now well into its second year as a fully-fledged member of the Trooper family. I’m delighted with the new look which artfully reflects the golden qualities of the beer and all of its military connotations. We hope that it will continue to generate a meaningful contribution toward the Force for Good campaign in supporting the thousands whose lives have been affected by their service.”

Sam Kennerley, Trooper Brand Manager said “Since its launch in 2018, Light Brigade has been very well received, including in international markets such as the Americas and Europe, and we are delighted to be maintaining our commitment to the fantastic charity that is Help for Heroes with this further investment in the brand.”

Mandy Lloyd, Head of Partnerships at Help for Heroes said “We have already had amazing support from Robinson’s Brewery and Iron Maiden who have done so much to raise vital funds for us to help those affected by their service in the Armed Forces. The launch of Light Brigade’s new look is really exciting and is perfectly timed to quench thirsts this summer.”