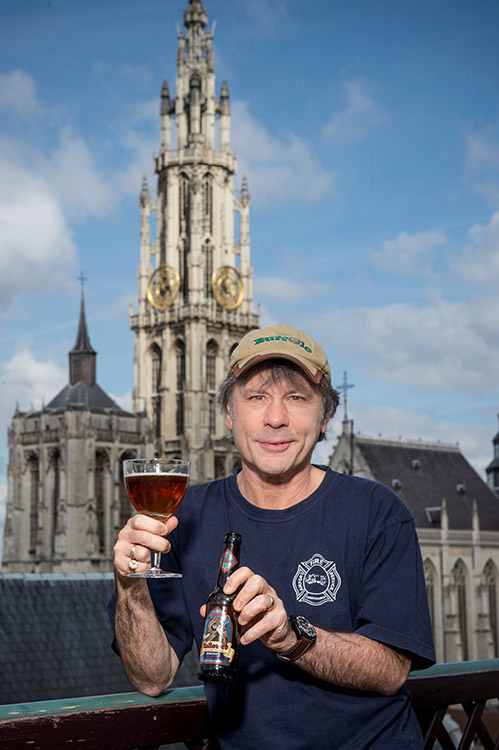 This new ale follows on from the success of the original TROOPER, which has sold over 15 million pints since its launch in 2013, and previous limited edition beers TROOPER 666 and RED ‘N’ BLACK.

Once again, the dynamic duo of ROBINSONS’ Master Brewer Martyn Weeks and IRON MAIDEN’s lead vocalist and ale aficionado BRUCE DICKINSON have teamed up to create something very special for beer and music fans alike.

BRUCE DICKINSON explains: “What makes this brew pretty special is that we’re adopting a Belgian yeast for the first time. I’m a big fan of Belgian beers, so I jumped at the chance to brew my own. While I get very excited about experimenting with new formulas and ingredients, the thing about Belgian beer is that it’s as much a way of life as it is a drink. We’ve tried to bottle that philosophy in HALLOWED, albeit with a British twist.”

At 6.0% ABV in a 330ml bottle, HALLOWED is a Belgian inspired beer that’s brewed in England. It is also one of the first beers to be brewed by ROBINSONS Brewery that uses Belgian yeast. ROBINSONS haven’t changed the yeast used in their beers since 1942, which makes HALLOWED even more special.

Martyn Weeks, Head Brewer at ROBINSONS Brewery, continues;“It’s all in the yeast. Belgian yeast yields a very distinct taste and presentation. You can sniff out a Belgian beer simply from its aromas: fruity, spicy and earthy. Belgian yeasts withstand higher alcohol levels, they attenuate well and create an array of phenolics and esters… put simply, this means more flavour and I think Hallowed drinkers are in for a treat.”

HALLOWED will be available from October 2017 for a limited period of four months.  Information on exactly where the beer will be available will be released on Iron Maiden Beer’s and Robinsons Brewery’s social media accounts in due course.