Iron Maiden and Robinsons Brewery have announced ‘TROOPER Red ‘N’ Black – a new limited edition beer from their award-winning TROOPER* range – which will be available to fans worldwide from September 2016.

TROOPER Red ‘N’ Black porter is the third beer in the TROOPER range following on from the stunning success of TROOPER and last year’s limited edition TROOPER 666. 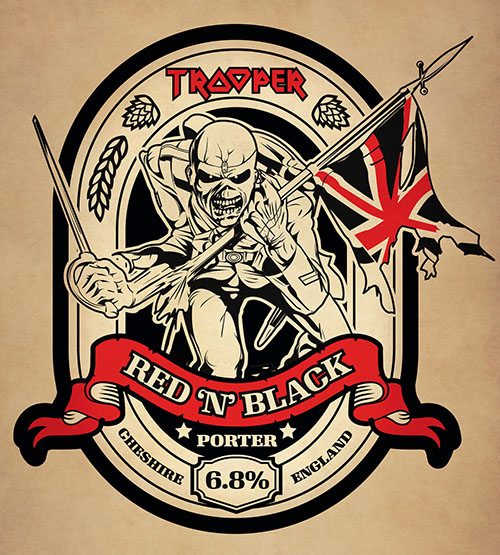 The beer, designed once again by IRON MAIDEN vocalist and ale aficionado Bruce Dickinson along with Robinsons’ Head Brewer Martyn Weeks, takes its inspiration from a very early Robinsons recipe which was first brewed in the 1850’s; a time when porter style beer was becoming increasingly popular in Britain.

Bruce Dickinson explains: “I like tasting outside the box. Stouts and porters were virgin territory for me so I just went by feel. Martyn and I hope we have created a new take on a classic beer and one which I hope will tickle the taste buds of ale fans in a pleasantly unexpected way.”

Taking its name from both the colour of the beer, which glows red when held up to light, and the song ‘The Red and the Black’ from Iron Maiden’s critically acclaimed 2015 album The Book of Souls, TROOPER Red ‘N’ Black uses a blend of chocolate and crystal malts which help give the beer a roasted malt and caramel backbone. Robinsons yeast, the same strain which has been used in the Stockport brewer’s beers since 1942, provides hints of both liquorice and honey to create a delicious warming brew.

John Robinson, Brands Manager for Robinsons Brewery said: “With millions of pints sold in 55 countries worldwide it’s safe to say that TROOPER remains a phenomenal success. Last year, we released TROOPER 666 at the request of the fans and this year we are happy to be releasing another limited edition beer that broadens the TROOPER range in an ever evolving and vibrant beer market.”

Robinsons have been taking global trade pre-orders from the beginning of March, to try and ensure that the limited edition bottles will be available simultaneously in local outlets in as many countries as possible around the world by autumn.

Information on pre-orders for fans will be announced on Iron Maiden Beer’s and Robinsons Brewery’s social media accounts.